Back to: Trial Questions

How will you manage this? 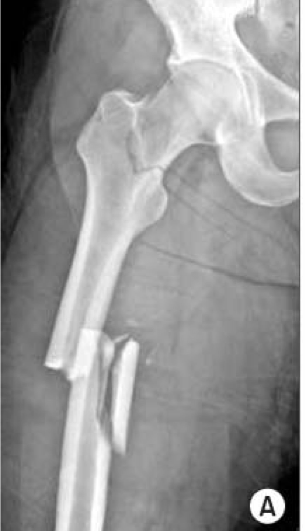 Which order and why?

What happens if the patient deteriorates once the anaesthetic is administered?

How can you apply traction to a Jackson table?

If the patient is not on a traction table how do you get a hip lateral xray?

Why not treat with a antegrade nail?

How will you manage – This is a combined ipsilateral femoral shaft and neck fracture. I would manage this patient according to the principles of ATLS. Specifically I would like to ensure that this is an isolated injury, that it is closed and NV intact.

Which order and why – in relation to the surgical management of this patient I would treat them as two separate injuries. If the patient was fit for 2 procedures then I would treat them on a radiolucent table, perform a retrograde femoral nail and fix the hip fracture with a DHS ensuring that there is overlap between the two implants to avoid a stress riser.

What happens if the patient deteriorates once the anaesthetic is administered? – If the patient is only well enough for one procedure I would stabilise the femoral shaft fracture as this is the life threatening injury and is likely to improve outcome from chest morbidity more than fixing the femoral neck fracture.

How can you apply traction to a Jackson table – there are attachments to the Jackson table which enable traction to be applied to a limb, this takes a while to setup but enables both of these injuries to be treated with one preparation.

If the patient is not on a traction table how do you get a hip lateral xray – this can be achieved with a small bump under the ipsilateral buttock and an oblique image intensifier.